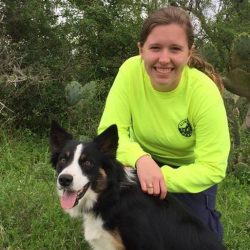 Elizabeth was born and raised in San Antonio, TX and then briefly left to attend college at Texas A&M University where she received her Bachelor’s degree in Biomedical Sciences. Elizabeth joined Alamo Area SAR in 2015 after deploying to the Wimberley floods that occurred in Central Texas in May 2015. She is an Emergency Medicine provider with interests in expanding her knowledge and skills in Wilderness/Disaster Medicine in the future. Her Border Collie, Rey, is her first SAR K9 and they have been an IPWDA certified Human Remains Detection K9 team since 2016. 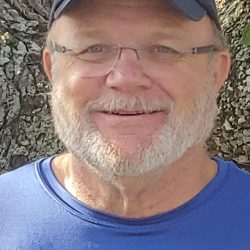 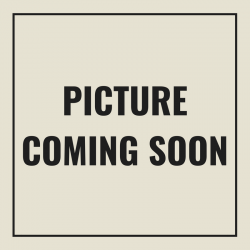 From Altamont, TN moved to San Antonio in 2019 with her job as a US Army Veterinarian. Joined team as a flanker and recently became a canine handler with Human Remains Detection K9 Remi. Spends free time doing volunteer work. 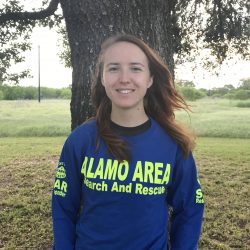 Christina Brewster was born and raised in San Antonio, Texas. She has been around animals her whole life. She spent 4 years volunteering with horses and disabled children using equitherapy as a way of rehabilitation. She is currently enrolled in online classes to become a licensed veterinary technician. Christina and her pitbull Lucas McCain are an IPWDA certified Human Remains Detection K9 team. 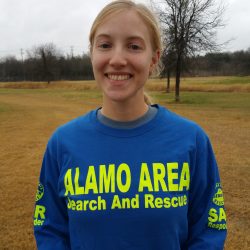 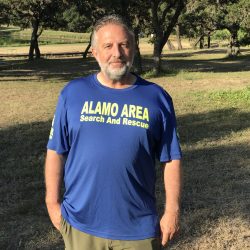 Paul served 22 years in the British Royal Army Veterinary Corps as a canine trainer/instructor. He moved to the USA in 2004 to establish a specialized search dog program for the DoD. Since then he was Senior Technical Adviser to the Army combat tracker dog program and Program Manager for the Office of Naval Research advanced detection dogs project. He is a canine consultant based in San Antonio, Texas. 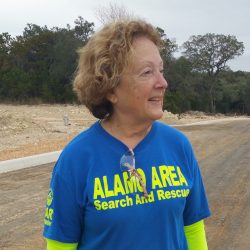 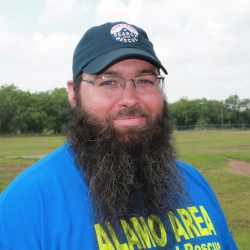 Christian is a doctoral student at Texas State University in the Criminal Justice department. He started search and rescue with Starbuck 5 years ago in Utah then rescued Saul about 6 months later and began training him as well.  Christian was an enlisted aircrew member in the Air Force and contracted in Afghanistan with the US Army before pursuing his education full time.  In addition to search and rescue he also trains and handles sea turtle nest detection dogs on Padre Island National Seashore with K9s 4 Conservation. 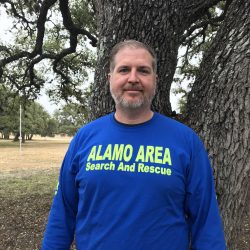 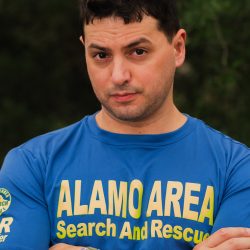 Originally from France, Jay spent six years active duty in the US Air Force and now works in the IT field. He joined the team in 2018 as a flanker and technologist. His interests include photography, camping, traveling, coffee and cooking. 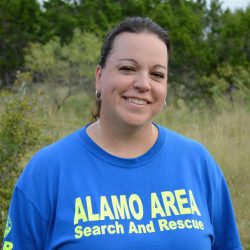 Jennifer was born in San Antonio but raised around the world as a military brat. She has lived in San Antonio since 1991 and joined Alamo Area SAR in 2015.  She has been a government contractor for 16 years and works as a database administrator at the Air Force Civil Engineering Center at Lackland AFB.  Jennifer and her canine Allie are a certified Human Remains Detection K9 team. She is also a certified with K9 Remi as a Human Remains Detection K9 team. 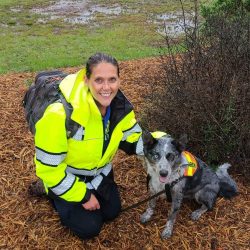 Shiloh was born and raised in Redwood City, California. She moved to San Antonio in 2016; where she started a business and adopted her Australian Cattle Dog mix, Mowgli. Having always been interested in Search & Rescue, and looking for a way to volunteer in her new community, she jumped at the opportunity to visit Alamo Area SAR when a friend invited her to watch a training. Shiloh and her K9 Mowgli are a certified team in air scent/live find. 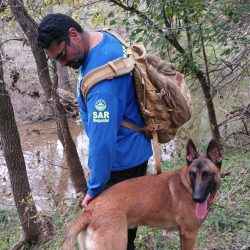 Orlando was born in Corpus Christi, Texas into a military family.  He began his military career in June 1994 joining the United States Army Military Police Corps.  During his ten years in the Army, Orlando, was a canine handler at Fort Riley, Kansas as well as a canine trainer and instructor at the Department of Defense’s Military Working Dog Training Center, Lackland AFB, Texas.  In 2004, he was honorably discharged from the Army and accepted a civilian canine instructor position with the Department of Defense as an instructor in the Specialized Search Dog (SSD).  He joined Alamo Area SAR in 2010.  Orlando and his K9, Remi, a Belgian Malinois, are a certified Human Remains Detection K9 team. 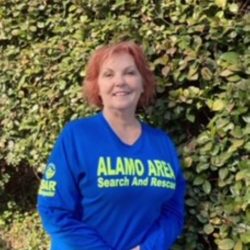 Karen was born and raised in Kentucky.  After high school, she joined the Air Force as a communications analyst.   Karen settled in Texas after her discharge and is a Registered Nurse employed with the Texas Board of Nursing.  Her strong desire to give back to the community coupled with her love of dogs led her to join the team as a flanker. 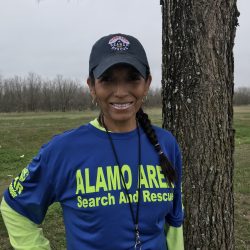 Juanita has been a nurse for 20+years working with Medically fragile, disabled and handicapped children. Hobbies-Solitude, hiking, nature, working out and dog training. She and her canine, Kween, are a live area/air scent certified search team. 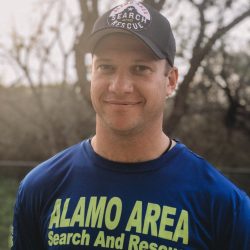 In 2019, James joined AASAR after relocating to San Antonio. With his interest in search and rescue and his previous military training, James became a flanker to assist handlers and their dogs in search missions. Originally from the Upper Peninsula of Michigan, James joined the United States Marine Corps in 2004 and later enlisted in the Air Force which brought him to the area. James spends free time rock climbing, hiking, and exploring the outdoors of Texas with his wife, daughter, and their dog. He is looking forward to the opportunity to work with AASAR to benefit the local community and improve his search and rescue skills. 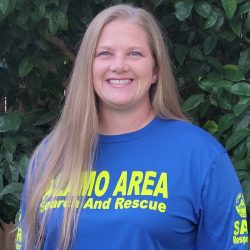 Heather calls the Texas Hill Country home but was raised all over the US. She currently works from home as a Software Specialists. Heather became interested in SAR as a way to serve her community in a fun and excited way that also included her Malinois Ren. Heather and K9 Ren are a certified live area/air scent search team.

Born in Darmstadt, Germany to a military family, Kevin grew up overseas. In Germany he became a technical rescue fire fighter in 2005, and spent much of his free time working as a climbing instructor and ski guide. During college, while attending Kent State University in Ohio, he volunteered as a ski patroller and completed outdoor emergency care as well as emergency medical technician courses. He also worked as a medical responder and guide at youth camps in the Alps and northern Michigan. Kevin joined the team in 2019 and is training his German Shorthaired Pointer, Valentine, in air scent live find. 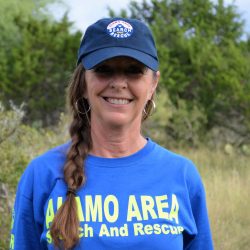 Sarah was born in Texas City, TX.  but  moved around the world until she attended Texas Tech University.  She is married with two children and four grandchildren.  Her last job was director of the Pregnancy Care Center.  She is retired and decided to join Alamo Area SAR during June 2015.  Sarah and her GSD Merci are a human remains detection K9 team. 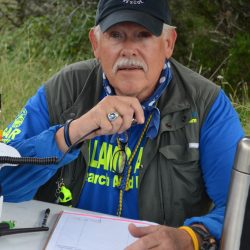 Born and raised in San Antonio.  Served seven years in the US Navy aboard two different aircraft carriers during the Vietnam War.  Graduate of St. Mary’s University in San Antonio.  Career in senior management positions in major corporations in Human Resources, Labor Relations, Safety and Security positions.  SPHR-Emeritus and SHRM-SCP certifications from the Society of Human Resource Management and the HR Accreditation Institute.  Football Official for 46 years, working the Referee position.  Previously served as the CERT Program Manager for San Antonio.  Currently a Commissioner on the Municipal Civil Service Commission for the City of San Antonio, hearing cases of discipline and discharge of city employees. Married with three grown children and one grandchild.  Joined Alamo Area SAR in 2013 to continue serving the emergency management community.